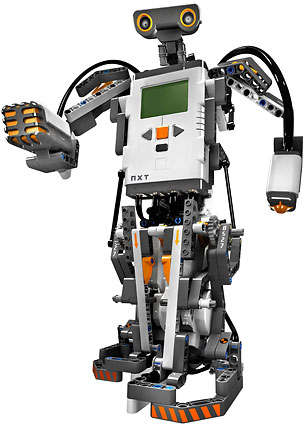 The days when robots fold laundry, dust furniture or do other domestic tasks still lie in the future. But even if robots can’t baby-sit our children, technology has advanced so rapidly in recent years that our children can build robots.

A variety of kits, for different ages and budgets, enable youngsters to create all kinds of automatons, including frogs, orangutans and classic mechanical humanoids.

“The number of robotics kits is growing all the time,” said Tom Atwood, editor in chief of Robot magazine, in Ridgefield, Conn., as new, cheap sensors make possible robots that can hear, see and touch. “The sophistication of the technology continues to increase.”

While plenty of robot toys are available — including elaborate models from WowWee, and Disney toys based on the Pixar movie “Wall-E” — the best educational experience often comes from building a robot from a kit, said Lem Fugitt, a consultant who works with Japanese toy companies and runs the Web site robots-dreams.com.

With a premade robot, he said, “You buy it, you get a high, and a couple hours later you’re fat or sleepy and the product is sitting in the closet.

“What you really want to do with a robotics purchase,” he continued, “is buy something that will involve and engage your child, and give them some motivation and sense of accomplishment, so they can say, Hey, I did this.”

Leading the pack for most consumers is Lego, which brought robot kits to the masses 10 years ago with the introduction of its Mindstorms kits, and which upped the ante two years ago when it revamped Mindstorms with its “NXT” brick — essentially a minicomputer that serves as the robot’s brain. The Mindstorms kit, meant for children 10 and older, sells for about $250 and includes the brick, 577 Legos, three motors, four sensors, and U.S.B. and Bluetooth connectors for programming the robot from a computer.

The Mindstorms robots have even inspired guidebooks, including two from a group that writes a blog about the kits, called NXT STEP thenxtstep.blogspot.com. Their latest, “Lego Mindstorms NXT One-Kit Wonders: Ten Inventions to Spark Your Imagination,” describes how to build projects like CandyPicker, a robot that can pick up things (like a sibling’s candy bars); RoboLock, a security system that locks and unlocks robots using a coded card; and BobBot, a mini construction loader.

“Nobody expected a company like Lego to do anything innovative with technology,” said Michael McNally, brand relations director for Lego Systems in Enfield, Conn. But children had been building pretend robots with their plastic Lego bricks for decades, so the company eventually teamed up with the Media Lab at the Massachusetts Institute of Technology and developed Mindstorms. Lego has since sold more than 1.3 million robot kits.

The Mindstorms line “bridges the kids’ early years with Legos,” said Paul Fiorello, owner of Carl’s Electronics electronickits.com in Oakland, Calif., an online dealer. Many schools use the kits and hold robot competitions, and Mr. Fiorello said he had seen a 51 percent increase in the sales of kits this year.

Robot kits vary in price and complexity. Near the high end is the $3,500 Bioloid Expert, popular in college robotics classes; far down the price chain is the Titan Tank, a $33 infrared remote-controlled tank, and a kit for a mini solar race car, priced about $9.

Shoppers should consult with a hobby shop or do online research to make sure they know what they’re getting their children (and potentially themselves) into. Some kits, for example, require soldering, which may not be in every amateur bot-builder’s skill set.

As a general guide to the variety available, Mr. Fugitt, Mr. Fiorello and Mr. Atwood suggested these kits:

OWI ROBOTS OWI makes 30 to 40 robot kits, ranging from $12 to $80 and featuring whimsical creations like a grasshopper, a “happy hopping frog,” a “peppy orangutan” and a kabuto-mushi, which is Japanese for rhinoceros beetle. They take from five minutes to four hours to build, Mr. Fiorello said, and have excellent tutorials.

ROBOTIS The Bioloid robots from this Japanese company start at $350 and include an $850 humanoid that can walk and perform programmed tasks.

Mr. Fiorello sees himself and other robot-kit devotees as bolstering old-fashioned skills in children that will serve them well in a high-tech world.

“It’s a lost art,” Mr. Fiorello said. “A lot of kids don’t know how to use a screwdriver. We’re trying to keep those skills alive.”