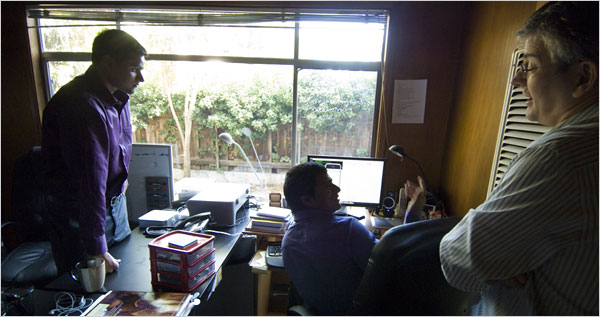 EVAN SHEFTEL of New York knew he could grow his business of buying and refining old jewelry. All he needed was capital, and quickly. But he had exhausted his credit with conventional lenders.

Across the country, in Los Angeles, Jay Turo and his company, Growthink, were looking for profitable investments.

Thanks to the Web site RaiseCapital.com, founded in March 2007 and based in Port Washington, N.Y., they found each other. Without even a face-to-face meeting, Growthink, a venture investment firm, invested in Mr. Sheftel’s business, eAssay, this year and is already seeing returns.

In a financial counterpart to online dating services, companies like RaiseCapital, Go4Funding and Go Big Network are giving small businesses a new way to meet prospective investors. And with turmoil in the financial markets, credit tightening and uneasiness about the conventional financial system, these companies hope to provide opportunities to invest, to lend and to borrow — and to find a market for these services.

“When you have a bunch of smart, ambitious people suddenly flood the market, it makes sense that a lot of new companies will be formed,” said Bob Goodson, the chief executive of YouNoodle, which is trying to bring together entrepreneurs and investors. “Investments in start-ups are highly volatile, but at least it’s a sector that’s upfront about the risk.”

Robert Bertsch, president and co-founder of RaiseCapital, said: “Most people, to get in front of a venture capitalist, need to have a connection or be a Stanford graduate. Our investors are not going to be all over you for a balance sheet or your exit strategy. They’re looking for something that suits their interest.”

Some of these sites are gathering places for investors who want a stake in companies, while others are for people who want to lend money. Whatever success they may realize, they are not expected to replace traditional venture capital or angel investing anytime soon. And whether the sites will take hold or which kind will win out is uncertain, for all of their anecdotal success stories.

“Everyone has a slightly different take on things,” said Adeo Ressi, a serial entrepreneur who started TheFunded.com, a Web site where start-up chief executives can discuss investors and match them with other entrepreneurs. “It’s not clear who the winner will be or even what the right approach is.”

Legal issues loom on several fronts. Companies must be cautious when offering investments to the public, and they have to be careful not to act as brokers, which are highly regulated.

The companies’ approaches vary widely. RaiseCapital and others try to arrange equity investments in businesses. Prosper, Zopa, Lending Club and others bring together would-be lenders with small-business borrowers. Ideablob, an outgrowth of Advanta, which issues small-business credit cards, and Cambrian House, a Canadian company, both allow potential investors to vote on ideas and help shape businesses. SellaBand, a Dutch company, helps musicians get financial backing from fans online.

Still other companies, like TheFunded and YouNoodle, are trying to build social networks in the entrepreneurial community, in the manner of Facebook or LinkedIn.

How the companies expect to make money also varies. Some, particularly lending firms, earn a commission on each transaction. Others rely on premium services, sponsorships or vendors that pay for access to their sites’ users.

Proponents compare the new companies to blogging, which allows the general public to publish online. The new financing companies hope to allow small businesses and entrepreneurs to bypass the limited-access corridors along Silicon Valley’s Sand Hill Road, where venture capitalists decide which start-ups get money.

“People need a platform like this as an extra measure to obtain funding,” said Mr. Bertsch, the president of RaiseCapital. “In some cases, it’s a company’s last means of survival.”

Mr. Bertsch said inquiries from new visitors to the site had jumped 21 percent in one month recently, to nearly 8,000.

When someone seeks a loan on Prosper, the site’s participating lenders “decide who and what get funded, rather than an elite group of bankers,” said Chris Larsen, Prosper’s founder and chief executive. At Prosper, based in San Francisco, applicants state why they want a loan — to start a business, pay down credit card debt, buy a house, pay for school — and how much they want, as well as the interest rate they hope to pay. Prosper runs a credit check and publishes the rating, and members can bid to participate in the loan, as if it were an item for sale on eBay.

The system worked perfectly for Marc Matthias and Benny Rivera, who needed $25,000 in April to start Diverse Desserts, a cake- and dessert-design company based in Manhattan. They needed money quickly, and they had taken out all the conventional loans they could, Mr. Matthias said. At Prosper, they received their loan in a week, at 11.5 percent interest, from more than 400 lenders who put up $50 to $500 each.

Prosper has made more than 27,000 loans, totaling $170 million, since Nov. 1, 2005. Jim Bruene, editor of Online Banking Report, an industry publication, said Prosper’s pace of about $100 million in loans this year was “a decent start, but that’s 20 houses in Los Angeles. It’s not a lot. It could be the tip of the iceberg; it’s hard to know.”

A crucial question, Mr. Bruene said, is how much regulation the government will impose on both the lending and the financing sites.

Aaron Kornfield, a lawyer at Fenwick & West in San Francisco who advises YouNoodle, said private companies needed to be careful about any form of general advertising regarding the sale of their securities, including the solicitation of investments online.

“Private companies are not supposed to advertise the sale of their securities,” he said. He added: “Investors can figure out what companies are doing on Web sites like YouNoodle, and then they can talk offline. But to go out and say, Here I am, invest in me, that’s not a smart idea.”

But Mr. Bertsch, the president of RaiseCapital, said confidently, “The government does not monitor transactions between private individual investors and private business opportunities.”

So the key to success may be whether a company can get attention and attract the interest of investors, then continue the ensuing dialogue in a private forum, similar to the dating services.

Manoj Duggirala, 23, was pursuing a master’s degree in material science and engineering at Stanford when he signed up on YouNoodle because he had an idea for a business, but no connections. Through YouNoodle, he found an investor, Jan Leeman. After a courtship of several months, Mr. Leeman invested $70,000 in Mr. Duggirala’s company, GiveandTake, an online shopping firm that has not yet opened.

“What is appealing about YouNoodle to me is the university connection,” said Mr. Leeman, an entrepreneur turned angel investor. “There are at least half a dozen stories of two grad students from Stanford starting something that turns into something wonderful.” Even though he attended Stanford and lives near the campus, “it’s difficult to get access to what the students are doing,” he said.

At YouNoodle, Mr. Goodson said that, according to the National Venture Capital Association, $30.5 billion in venture capital was invested in 2007, and the University of New Hampshire has estimated that angel investors put in another $26 billion. “That’s a colossal amount, and it’s nearly all done without the use of technology,” he said. “People are still sitting down face to face and giving each other pitches. That’s a lot to be distributed without a more intelligent use of technology.”

One YouNoodle investor is Peter Thiel, a founder of PayPal (now owned by eBay) and a managing partner of the Founders Fund venture firm. “There’s something strange about venture capital” operating much as it did in the 19th century, he said, “when it’s investing in all of these 21st century technologies.”

Mr. Sheftel, at eAssay, was running a wholesale jewelry business in New York, R. Sulimani, when the economy began to sour. People were selling their “broken, old, outdated jewelry” to raise cash, he said, and he knew he and his partner could buy it, refine it into gold bars and sell it for a small profit — if they could expand. But without the option of a bank loan, he “decided to try out RaiseCapital,” he said.

He called a few prospective lenders he had met on the company’s site; one of them was Mr. Turo, managing partner of Growthink.

Mr. Turo said he was drawn to RaiseCapital as a way of looking beyond Silicon Valley and the Bay Area. One Growthink investor had already asked Mr. Turo about opportunities in jewelry, and within a few weeks Mr. Turo had provided Mr. Sheftel with half a million dollars. Mr. Sheftel was then able to increase his revenue to $250,000 to $300,000 a week from an average of $150,000.

The two have still not met in person; Mr. Turo said that for an investment this size, and the modest risk involved, a meeting was not necessary.

“I don’t think RaiseCapital is the place to do seven-figure investing,” he said. “It’s like a dating site. You make a connection online, and you take it offline,” which in Mr. Turo’s case meant due diligence and writing a check. “There’s only marginal value in a face-to-face meeting.”