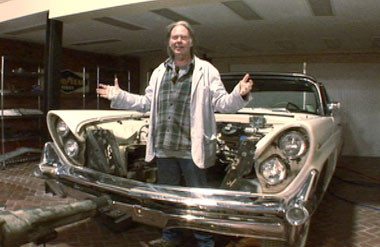 NEIL YOUNG wants fuel-efficient cars, and as a politically active rock star, he wants everyone else to have them, too. But Mr. Young is not ready to give up his love of big cars, and he doesn’t think many other drivers are, either.

So Mr. Young, the iconoclastic godfather of grunge, has assembled a team to turn a nearly 20-foot-long, 5,000-pound 1959 Lincoln Continental into a vehicle that will run on natural gas, electricity or some other form of clean energy. His aim is to win the Progressive Insurance Automotive X Prize, a $10 million challenge to develop a vehicle that can get 100 miles per gallon or better by 2009.

He’s calling the project Linc Volt and he picked that Lincoln from his collection because it was his “favorite of the craziest and most out-there designs that American automobile manufacturers had come up with,” Mr. Young said. “I thought it would be a good poster child for the latest in technology.”

Mr. Young, 62, is a longtime tinkerer. He holds several patents, mostly having to do with model trains, and he once owned part of the model train maker Lionel. “I’m a transportation freak,” he said. “I like transportation devices. I like mechanical devices.”

But more to the point, he said: “I’m just a curious guy. It seems funny to me that we can’t get better mileage than we’re getting.”

His ingenuity is right at home in the hills above Silicon Valley, where he lives. He said he had been intrigued watching his techie neighbors at work, not only on computers but now also on electric cars, like the Tesla. Musically, he has criticized the quality of digital music, but he appeared at a Sun Microsystems event this year to praise Sun’s Java software, which he said had made it possible for him to release huge volumes of archival footage and recordings on high-definition Blu-ray discs.

“Music and mathematics, they go together,” he said. “It’s all harmonic, really.”

His own ride these days is a 1982 Mercedes coupe diesel that runs on vegetable oil he buys from a restaurant in Pacifica, Calif. “That’s a good source of fuel,” he said. “It’s working for me. It’s clean, and it doesn’t smell bad.”

But the diesel, he said, “is a Band-Aid.” The goal, he said, is to get cars to run on even cleaner fuels — electric batteries or natural gas.

That’s where Linc Volt comes in. Mr. Young teamed up with Johnathan Goodwin, owner of SAE Energy in Wichita, Kan., who was deemed a “motorhead messiah” by the business magazine Fast Company for his modifications of big cars into high-mileage, high-horsepower, clean-burning vehicles. He is currently refitting a Jeep for Gov. Arnold Schwarzenegger of California.

One of Mr. Goodwin’s partners, Uli Kruger, is another important part of Mr. Young’s team. Mr. Kruger, a German who lives in Australia, achieved renown for his experiments mixing different fuels. With Linc Volt, Mr. Kruger said, “What we have will be a very interesting concept that has never been done before. We’ll be running a rotary engine with natural gas.”

Until now, natural gas vehicles have run on piston engines, with poor fuel efficiency. Mr. Goodwin said the Linc Volt team was “enhancing the range and efficiency with another fuel source, which we call the slog.” They run water through a process of hydrogen fracturing, and capture it in the exhaust and use it again. That means instead of using a massive tank of natural gas that can go only 500 miles before refueling, they will use a much smaller tank and travel 1,000 miles.

“If we can get a thing like that to be fuel efficient — the quintessential gas guzzler — imagine what we can do with a smaller car,” he said.

Mr. Goodwin and Mr. Kruger say that Mr. Young is very much hands-on. “There have been times where Neil will get out of a concert at midnight or 1 a.m., charter a $60,000 flight and come here to work on the project,” Mr. Goodwin said. “We’re talking turning wrenches.” Mr. Young is not a natural mechanic, Mr. Goodwin said, but “his desire to learn is what you see in a teenager.”

Mr. Young estimates the project will cost less than half a million dollars, at least to get to the end of the first stage of producing a road-ready vehicle.

Merely trying to produce a 100-miles-per-gallon vehicle is challenging enough, but the Goodwin-Young team intends to win the Automotive X Prize. More than 100 teams around the country, from well-financed electric-car startups to a high school science class, have expressed interest in competing for the prize, which is run by the same foundation that in 2004 awarded $10 million to the first team to send a piloted civilian aircraft to the edge of space. Even the big automakers may enter, although none have yet done so.

Creating the car is only one step toward winning the prize, however. The winner must also compete in two long-distance stage races in various cities around the country, and must demonstrate a capacity to produce more than 10,000 of the vehicles a year. “Our goal here is reducing our dependence on foreign oil, and you can’t do that with one-off vehicles that die in the backyard,” said Don Foley, executive director of the X Prize Foundation.

Mr. Young said he didn’t see the production requirement as too steep a hurdle for his project. He figures once he and his team come up with a workable way to refit existing cars, they will be able to sell it at dealerships across the country.

Mr. Young at times shrugs off the competitive aspect of the project. “We’re not in the race against other contestants; we’re in a race against time,” he said at the Sun Microsystems event in May. “We’re not in this to win the X Prize. I am focused on a goal, and it’s an audacious goal: to eliminate roadside refueling.”

In addition, Mr. Young said he would share whatever his team comes up with, so that others could build on their work. His Shakey Pictures is producing a documentary on the project, and he’s putting much of the video online as the project moves along, both at lincvolt.com and on a YouTube channel, youtube.com/lincvolt, he has set up. He said the car would also be linked to the Internet, so its vital statistics could be piped online in real time during each test drive.

“It’s a reality car show,” Mr. Young said. People will be able to see what mileage the car is getting, how it’s doing at different altitudes, how much battery life is left and how the generators are working.

“Lots of people will be able to pick up data from the Web site, and maybe learn from it and put it in their own projects,” he said. “The idea is to share the knowledge over the Internet and share the experience.”

Mr. Young said the information should run two ways. “We’re going to have an innovation gallery,” he said. “People can submit ideas, talk about them and vote which ones are best.”

The videos already on the site have an engaging, informal quality. Mr. Young, wearing sunglasses in the garage and sipping a beer, seems less like a rock star than an aging, paunchy mechanic, while Mr. Kruger and Mr. Goodwin have the lean look of guitar heroes.

Yet Mr. Young has the stage presence to carry the videos. In one, Mr. Goodwin and Mr. Kruger gave the geeky details of what kind of fuel they tried, and how they patched an engine leak, and then Mr. Young added a poetic touch, describing a test ride through Wichita in which the big white Lincoln moved stealthily on its near silent electric motor.

“It’s fantastic, it’s very eerie, very ghost-y,” he said, “this beautiful, white, huge car moving down the road and not making a sound.”