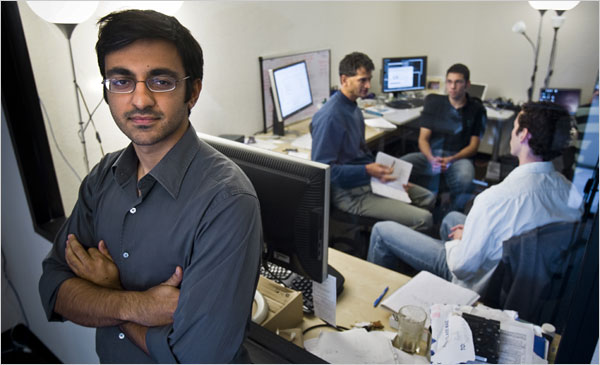 Keeping It All in the Google Family

As befits a company whose name is a play on words, Google (named for the mathematical term “googol”) has come up with playful names for its workers. Employees are known as Googlers, new employees are Nooglers and gay employees are Gayglers. Now that the company has been around for a decade and employs upward of 20,000 people, another group has earned its own name: former Googlers are known as Xooglers.

Many of the Xooglers (the name is a contraction of ex-Googlers but is pronounced “zooglers”) are young, entrepreneurial and, thanks to Google’s soaring success, wealthy enough to start their own second acts. Some are starting companies in Silicon Valley and beyond, and others are helping to finance those ventures.

With investment money scarcer because of the financial crisis, many Xoogler entrepreneurs have tapped into a network of affluent and technically skilled investors — their former co-workers, some of whom still work at Google.

“Angel investing is slowing down a great deal,” said Adeo Ressi, the founder ofTheFunded.com, a Web site on which entrepreneurs rate Silicon Valley’s venture capitalists and angel investors. “For many, an investment by a former colleague may be the only shot they have.”

Steve Vassallo, a principal at Foundation Capital, a venture investment firm, said: “My friends call it ‘the Google money tree.’ You get some half-baked idea, you talk to five people at Google, and each of them gives you $50,000.”

Xooglers believe not only in their ideas, but also in the network they have cultivated, as well as the Google culture, which informs their new ventures.

“Google was just a massive explosion and sucked in all this talent,” said Avichal Garg, a former product manager at Google who is now co-founder of PrepMe.com, a start-up aiming to take on the test preparation industry.

“All of these people are leaving who are relatively young and ended up with fair bit of money,” he said. “They didn’t walk away with $20 million, but they walked away with $2 million. And now the cost of running a new company is so low that essentially Google financed their start-up.”

Mr. Garg raised a six-figure sum from former Google colleagues for his business. He is now part of a network of Xooglers trying to promote tighter links among the alumni community. The group meets quarterly, and while it has attracted only about two dozen people thus far, each meeting brings new participants and draws them from farther away. Aydin Senkut, a former senior manager at Google who now runs his own angel investment firm, Felicis Ventures, said Xooglers from New York and overseas came to Silicon Valley for a gathering on Nov. 11.

Google’s effort to build an entrepreneurial culture almost by definition anticipates an early exit by many workers.

“I look at the people coming into the company, and many of them are very entrepreneurial,” said Alan Eustace, Google’s senior vice president for engineering and research. “I believe if you come in and have that entrepreneurial track record, you will get a chance to advance that. You’ll have an edge, and you’ll learn an awful lot at Google.”

Greg Gianforte, chief executive of the software maker RightNow Technologies, said many people wanted to start their own businesses, but business schools did a poor job of preparing them. “Places like Google,” he said, “are really the best learning ground for the skills you need to do it.”

Google imparted “an emphasis on thinking big,” added Elad Gil, who was a product manager at Google and now has a start-up, MixerLabs. “The ambition of the company got rubbed into the employees as well.”

Employees recalled product strategy meetings in which the Google founders, Larry Pageand Sergey Brin, aggressively challenged employee proposals. Though grueling, the confrontations were never personal, they said, and always focused on the merits of the ideas.

“As a start-up, you bring that same analytical approach: How do I get users? What decisions do I make?” Mr. Gil said. “I think a lot of Xooglers take that with them when they start their own companies.”

He says he is also trying to uphold the same high standards in hiring that he saw at Google. “It takes longer to find the right people, but when you find them, they’re really exceptional,” Mr. Gil said.

Many Xooglers said the company also helped its employees develop self-confidence. “I find the people at Google very inspiring,” said Anna Patterson, who left Google with a colleague, Russell Power, to join Cuil, a new search engine started by her husband, Tom Costello. “They teach you to believe in yourself and to follow through with your ideas.”

Brian Singerman, a former engineer at iGoogle and now a partner at Founders Fund, a venture capital firm, cited another lesson.

“The thing that Google made crystal clear was release early and release often,” he said. “Iterate, iterate, iterate. The Web allows you to do that quickly, and Google was masterful at that.”

Bret Taylor, chief executive of FriendFeed, a start-up that lets people track what their friends are doing across various social networks, said his time as a product manager at Google had taught him the importance of speed and stability.

Each of Google’s products “runs faster, returns results and works the way you expect it to work,” he said. If a piece of software was not working right, the developer kept at it until the flaws were worked out or the project was dropped.

“That lesson came to us very early on at Google,” said Mr. Taylor, who co-created Google Maps. “If page views were slow, that was the only thing you were allowed to work on. It’s something that a lot of entrepreneurs don’t value.”

On a big-picture level, Mr. Eustace, vice president of Google, said the company promoted “a missionary view” of the world. “You really do want to change the world on some dimension,” he said. “It’s not just about money, it’s about doing something you think is important. The people that leave and the people that stay share that.”

Google does not reveal its rate of attrition, but the company says it tries to keep its employees. It still offers most engineers the fabled “20 percent time” — the chance to spend one day a week working on projects that are important to them. Often, the company hires people without having a specific task for them, figuring they will come up with something worthwhile.

But “no matter how hard they try to promote an entrepreneurial culture, some things just can’t happen at a big company, and people get frustrated and move on,” said Alex Gould, an instructor at Stanford University and an entrepreneur and former venture capitalist.

It is a common refrain, and often the Xooglers’ only criticism. Dominic Preuss joined Google in March 2004 in New York, when the company employed 1,400 people, but by the time he left in November 2007, to start FunCoop, an online distribution network for casual games (financed mostly by Xooglers), that was no longer the case.

“It was no longer a small, nimble company where everyone was trying to change the world,” Mr. Preuss said. “Google is the most nimble, most malleable 20,000-person company out there, but it still is a 20,000-person company. A lot of the bureaucracy and politics that are inherent in a big company started to kick in.”

Successful companies have long spawned spinoffs and start-ups. Former Microsoftemployees have started a number of “Baby Bills,” nicknamed for Bill Gates, in and around Seattle. But according to Tony Audino, a former Microsoft executive who is chief executive of Conenza, which builds and manages online communities for big companies, “it didn’t happen until 15 to 20 years later,” after the company was well-established and had built up a solid managerial core.

Google is rewriting the rules and accelerating the pace. Only time will tell if the Xooglers’ start-ups will achieve the success of the most notable Silicon Valley alumni network, PayPal. After eBay acquired PayPal, founders and employees went on to start LinkedIn,YouTube, Slide, Yelp and Founders Fund.

Mr. Singerman, the former iGoogle engineer, is a partner at Founders Fund, which is headed by Peter Thiel, a PayPal founder. Mr. Singerman says he thinks that the Google network will have the same success as PayPal’s, because of the number of “smart, driven people dedicated to making their company work, no matter what.”

FriendFeed is perhaps the best example of the network in action. Bret Taylor left Google with his colleague Jim Norris, and they became entrepreneurs-in-residence at Benchmark Capital, a venture capital firm. While seeking financing for FriendFeed, they pitched their idea to Paul Buchheit and Sanjeev Singh, two Xooglers-turned-angel investors, who had worked on Gmail. They were so impressed that they invested in and joined the company. FriendFeed’s first $5 million came mostly from Mr. Buchheit and Mr. Singh.