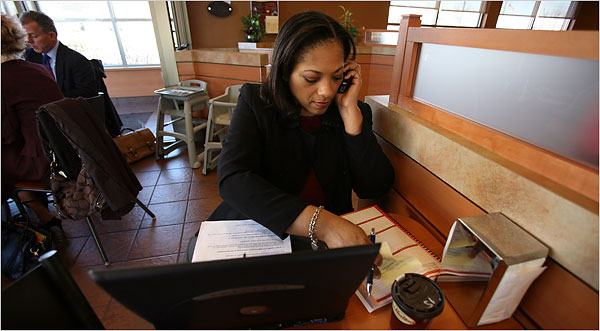 WITH layoffs mounting daily, the ranks of independent contractors appear ready to grow. People who have lost full-time jobs are seeking work on their own, and businesses that once hired full-timers and paid them benefits are turning to more affordable freelancers.

Several online companies are easing the transition to a freelance economy for workers and employers. Freelancers in a wide range of fields can use sites like those operated by Elance, oDesk and Guru to advertise their work and bid on jobs; employers can use the sites to assemble a contract work force.

Karen Swim, 45, of Sterling Heights, Mich., left a successful career in corporate marketing four years ago to write for a living. “I found Elance through a Google search,” she said. “I was amazed. I thought, Oh my God, there’s a whole underground of people making a living, and they’re not going to a corporate office every day.”

Instead of donning a suit and knocking on doors, Ms. Swim discovered, “You could sit at your computer and within an hour create 10 to 15 proposals.”

Her rates — for copywriting, marketing and résumés — have climbed to $100 an hour after starting at $50, she said, and she has steady clients, both corporate and individual, in places like Australia, Ireland and Kuwait.

More than 14.8 million people were self-employed last year, accounting for about 12 percent of the private, nonfarm work force, according to Steve Hipple, an economist with the Bureau of Labor Statistics.

As of January, according to the bureau, more than three million jobs had been lost in this recession. Steve King, a partner at Emergent Research, a research and consulting firm in Lafayette, Calif., that focuses on small businesses, said that in times like these, many people who can get jobs will grab them. But when résumés and applications go unanswered, he said, “people don’t have a choice. I call them the accidental entrepreneurs. You start to see the growth in terms of self-employed.”

Gary Swart, the chief executive of oDesk, said, “We’re seeing 5-to-9ers — people who have a day job but are looking to make some spare cash in their spare time — or stay-at-home moms.”

But the growth in the job sites does not mean that independent contractors are immune to recessionary forces. “Businesses tend to hold on to their employees,” said Inder Guglani, chief executive of Guru. “With resources shrinking, they’ll reduce freelancers first. The total dollars spent on freelancers in the economy, that’s definitely contracting.”

But the online matchmakers say other trends are helping to offset that decline. Better bandwidth and newer software tools make remote work easier. “Businesses have figured out how to be comfortable with employees working remotely, and that has educated workers and managers,” said Fabio Rosati, chief executive of Elance.

The system at oDesk lets employers monitor contractors’ work remotely. A boss can see when a worker is logged in, peek at a screen shot and even view the worker on a Web cam. With oDesk handling all the invoicing and payment, some companies are shifting the contractors they already have to oDesk.

Rachel Pennig, manager of customer support for PBwiki in San Mateo, Calif., which creates collaborative wikis for clients, said she found at least half of her 12-member team on oDesk. One stay-at-home mother from South Carolina started as a contractor, kept increasing her hours, and wound up on the staff, she said.

The sites all operate on the same principle as eBay, enabling workers to build their reputations. All the sites issue 1099 tax forms and other documentation, saving trouble for employers. The sites survive on fees, charging employers or taking a commission from freelancers’ pay, often 5 to 10 percent.

The sites all take a cut of the work, although each one works a little differently. Odesk takes a 10 percent charge on all services. Elance deducts between 6.75 percent and 8.75 percent from the payment, covering both its service fee and credit card costs. The range varies, depending on whether freelancers use the free listing service, or pay a one-time fee of $9.95 to $39.95. While Guru.com allows some freelancers to sign up for free, it charges a 10 percent fee on top of their billings. For freelancers who pay for premium services, ranging from $29.95 per quarter to $129.94 per quarter, Guru takes 5 percent of the total bill.

Mr. King, the analyst, said he had also seen a rise in competitive sites serving narrower markets, like NineSigma and InnoCentive, tailored to the research and development field, or Crowdspring and Genius Rocket, which provide designers, or Rent A Coder, offering computer programmers. In addition, he said, the big sites continue to add features, largely to keep people from taking business connections offline to avoid the fees.

For some people, working through these sites provides opportunities that would not be possible otherwise. Jessica Allen, 19, of Clarksville, Tenn., said she had found about 15 Web design jobs through oDesk in the past year, including steady work from Chicago and Alabama. Jobs involving graphic and Web design are not available in Clarksville, she said.

Danny Guillory, chief executive of Innovations International, said he used Elance to round out his staff. He said the company, a human resources consultancy based in Salt Lake City and San Francisco, has 5 employees and 30 independent contractors, with revenue of up to $3 million a year.

Mr. Guillory said companies needed to decide which unique services they offered customers and which features were essentially commodities that contractors could provide. “What is unique will remain in an organization’s employee structure,” he said. In his company’s case, he said, it’s the content — the lessons for customers.

But delivering that content, he said, is something many people can do. “That can be commoditized,” he said, and therefore he outsources it.

His contractors also liked the arrangement, Mr. Guillory said. “People don’t want to have one job and put all their eggs in one basket,” he said. “The days of staying with someone for 30 years and getting the gold watch have been long gone.”