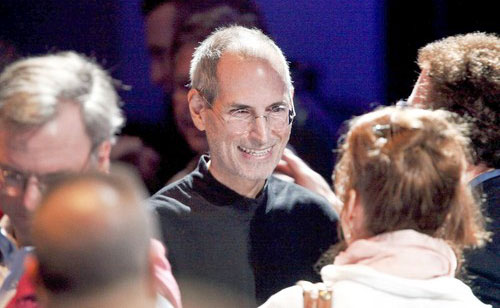 It was supposed to be about Apple Inc.’s dazzling new products. Instead, the company’s press conference on Wednesday was about the man.

Grinning like a kid in a toy store, Chief Executive Steve Jobs stole the spotlight with his first official public appearance in nearly a year. He received a liver transplant about five months ago and returned to work part time in late June.

“I have the liver of a twentysomething person who died in a car crash and who was generous enough to donate their organs,” said Jobs, 54, who appeared markedly thin and spoke in a scratchy voice. “I wouldn’t be here without such generosity, so I hope all of us can be as generous and elect to be organ donors.”

The intense focus on Jobs’ health underscores his importance to the Cupertino, Calif., technology company that he co-founded in 1976 with Steve Wozniak. Jobs departed from Apple in 1985, ousted by then-CEO John Sculley, but returned in 1997 to help the ailing company return to profitability.

But in 2004, Jobs announced he had pancreatic cancer.

Then, on Jan. 5 of this year, Jobs said in a statement that he had a “hormone imbalance” whose remedy would be “relatively simple and straightforward.” On Jan. 14, Jobs said that his health issues were “more complex than I originally thought” and that he would take a five-month medical leave. Apple’s shares tumbled after his announcement.

Days later, the Securities and Exchange Commission started an inquiry into whether Apple appropriately disclosed the nature of his illness. The SEC has not commented on the probe.

Jobs’ return to the public eye signaled that the company’s chief impresario was back in charge.

“It was a little moving for many of us,” said Tom Conrad, chief technology officer for Pandora Media Inc., an Internet radio company that makes one of the most popular applications for Apple’s iPhone. “He certainly has played a critical role in designing the future, and to see him back talking about products is good for the industry.”

Jobs, filling his familiar role as master of ceremonies, unveiled several updates to the lineup of iPods, a product that helped cement Apple’s place among the decade’s most influential technology companies.

Since launching the digital music player in October 2001, Apple has sold more than 220 million iPods, compared with roughly 180 million Walkman players ever sold by Sony Corp., according to Daniel Ernst, an analyst with Hudson Square Research.

But iPod sales have slowed in recent months as consumers opted instead for the iPhone, which has many of the same functions in addition to being a mobile phone. Last quarter, sales of the iPod declined 7% from the same period a year earlier.

“This is one of his babies,” said Tim Bajarin, a longtime Silicon Valley technology analyst who also attended the presentation in 2001 when Jobs introduced the first iPod. “He’s saying that iPods are still important.”

“It was all incremental improvements,” Ernst said. “But those subtle changes keep the company leaps and bounds ahead of the competition.”

Despite the rock ‘n’ roll theme of the event — which featured pop star Norah Jones onstage singing two songs — Apple disappointed legions of Beatles fans who had hoped the company would at long last put the Fab Four’s music on the iTunes store.

Jobs never spent more than 15 minutes onstage at a time, handing over most of the details of the product launches to Philip Schiller, Apple’s senior vice president of worldwide product marketing, and Jeff Robbin, Apple’s vice president for consumer applications and a key figure in iTunes.

Bart Decrem, founder of iPhone game-maker Tapulous Inc., said Jobs’ return was “a special moment. It was touching. And it’s great to have the guy in the pilot’s seat.”

Another measure of Jobs’ influence is in furthering the cause of liver transplants. At the press conference, the charismatic executive issued a call for people to consider donating their livers.

“There has certainly been more interest, an increased curiosity about what causes liver diseases in the past 90 days,” said Rick Smith, chief executive of the American Liver Foundation in New York, who said his organization has seen an uptick in calls and attendance at the group’s Liver Life Walk events throughout the country.

“I think that Steve Jobs has at least temporarily heightened awareness of liver disease in this country,” Smith said. “Americans are now more curious about what causes liver diseases and what they can do to help. That’s a positive thing.”