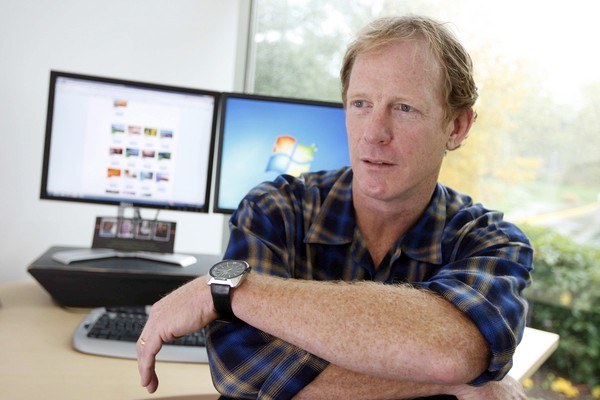 So when it came time for the software giant to create the sequel, it hoped a little Hollywood touch would bring audiences back to its screens.

Jonathan Wiedemann, the former managing director of Propaganda Films, which made groundbreaking MTV videos as well as films such as “Wild at Heart” and “Madonna: Truth or Dare,” has for the last three years been leading a team responsible for a key feature on the Windows 7 operating system, the much-hyped upgrade to Vista that Microsoft will begin selling today.

If the early reviews are any indication, Wiedemann and Microsoft may have a hit. Critics who have tested preview copies seem to like it, and businesses say they plan to buy it.

The stakes are high. Sales of the operating system — essentially the software on top of which all other software runs — brought in more than $10 billion in profit last year, more than half of Microsoft’s net income.

But Windows sales have been slipping, in part because of the economy and in part because Vista was so poorly reviewed that many customers decided to keep their old computers, running Windows XP. In addition, rivals Apple Inc. and Google Inc. continued to eat into Microsoft’s market share and mercilessly mock the company for being “user-unfriendly.”

“If we started to hear the things about Windows 7 that we heard about Vista, people would have turned their backs on it,” said Laura DiDio, principal analyst at Information Technology Intelligence Corp., a research and consulting firm in Boston. “That would have been disastrous for Microsoft.”

In developing Windows 7, Microsoft needed redemption, and that meant re-booting the way it developed software, including wresting some control away from engineers and working more closely with computer makers.

“One of the issues with previous operating systems, Vista for example, was that you had a lot of people doing smart things without thinking of the larger picture,” said Wiedemann, who also once modeled for Richard Avedon and was married to actress Isabella Rossellini.

If Windows 7 is a hit, much of the credit is expected to go to Windows division President Steven Sinofsky, who used to lead development of Microsoft’s Office suite of software — Word, Excel, PowerPoint — and was tapped to bring order to developing the operating system. Sinofsky instituted a streamlined process and brought in new managers.

Among them was Wiedemann, who led the effort to improve the user experience on Windows 7, and Mike Angiulo, who had to repair frayed relations with computer makers and help incorporate their suggestions into the product. Angiulo, a graduate of Harvey Mudd College in Claremont, joined Microsoft right out of school in 1993 when he was 20.

Building an operating system is no small feat. Windows 7 required marshaling about 3,000 people, all of whom, Wiedemann said, were incredibly smart “student body presidents.”

Wiedemann, who ran a team of 90 people as part of that operation (his official title is principal UX manager, with UX referring to user experience), said what he called the Sinofskian model helped present a “clear and rational” outline of what they needed to do.

Vista was panned largely because it was not compatible with many other devices that people like to plug into their computers, such as printers, digital cameras and phones, analysts said. In addition, it suffered from “bloat” — it was big and hogged too much power, slowing down the computer.

Yet Vista had some good things going for it. It had shored up many security holes that had plagued earlier operating systems. It had some elegant new features, like Windows Aero, that lent a visually pleasing touch to the system. And even though Microsoft cleaned up some of the problems in Vista, its reputation was already set.

“You do not get a second chance to make a good first impression,” analyst DiDio said.

According to Angiulo, who had worked with Sinofsky on the Office team, Sinofsky started at Microsoft as an aide to Bill Gates, and he helped prod the founder to recognize the growing power of the Internet in the mid-1990s. Sinofsky also oversaw a major redesign of Office. The experiences made him a perfect candidate to cope with the changing tech landscape — the growing dependence on mobile devices and “cloud computing.”

Sinofsky’s mantra was: “Don’t over-promise and under-deliver. Just promise and deliver. Tell us what you’re going to do and do it,” Wiedemann said.

“That was huge,” he added. “That was new in Windows culture.”

In Vista, Angiulo said, Microsoft frequently told its partners that it would supply something, and then changed it. It failed to meet deadlines.

Sinofsky wanted to change that culture. Angiulo and Wiedemann recall the project kicking off in summer 2007 with a meeting at the Meydenbauer Convention Center near Microsoft’s campus in Redmond, Wash. Everyone from the Windows team attended, with each group wearing color-coded T-shirts.

The atmosphere was decidedly upbeat, the executives recall. No one felt defeated by Vista. But everyone recognized the need for change.

“It was a great new team,” Angiulo said. “The vision was compelling to people.”

The new thinking became clear outside Microsoft as well, in what the company likes to call the “ecosystem” — all the developers that make software that works on top of Windows, and all the computer companies that make the machines that Windows works on.

Within the first 30 days after Vista was launched, Microsoft began meeting with computer makers to plan the next operating system.

“That was the first time we had had that level of alignment discussion and collaborative discussion, that early in the process,” said Russ Ray, senior product manager for Dell Inc. “What that signaled to us, and this was a constant theme through the whole development, was Microsoft saying: ‘We’re not going to be all over the map on this one. We’re going to lock and load. We’re going to deliver.’ ”

Those were “difficult conversations,” Angiulo said. “These were customers who were suffering with Vista. They were having problems right now.” And Microsoft needed to earn their trust.

In addition, spurred to some extent by Apple’s and Google’s better-looking and more useful user interfaces, Microsoft needed to win over individual computer users.

The company sought to wrest some control from the engineers, who typically pile on features, and give some extra power to the designers, who focus on what users want.

Some of that, Wiedemann said, resulted in some noticeable changes: Desktop wallpaper featuring stunning illustrations commissioned from artists around the world. A new task bar that makes it easy to navigate between programs. Shorter boot-up times. A system that automatically finds and connects to wireless networks, to say nothing of wireless devices.

Despite the similarities to the making of a major motion picture — the thousands of people it takes to pull a film together, the egos involved in shaping the final product, and the struggle between an artistic vision and commercial pressures — Wiedemann said the stakes were higher in terms of real-world effect.

“In Hollywood, I could spend several years on a project that ultimately was super-commercial and not that interesting,” he said. “What’s different with Windows is it’s going to be touching hundreds of millions of people around the world many, many times a day.”