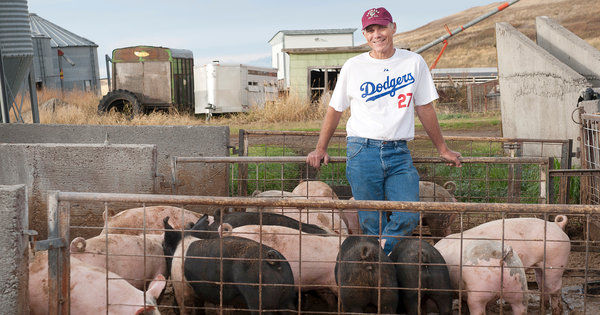 I broke this story at the end of the 2011 baseball season, when the best fantasy baseball player in the world – with winnings of more than $300,000 over the past three years – was revealed to be Idaho pig farmer Lindy Hinkelman.

The National Fantasy Baseball Championship, a contest paying a top prize of $100,000, draws an elite collection of contestants: computer geniuses, deep-pocketed stockbrokers and money managers, maybe a young man or woman looking to be the next Billy Beane or Theo Epstein.

But the contest over the years has produced only one two-time champion, Lindy Hinkelman, a 59-year-old pig farmer from Greencreek, Idaho.

Hinkelman, who has won two of the last three titles in one of the country’s most highly regarded contests, does not have a perfect answer for how he has been able to do it, but he is happy to offer his gut take on it all.

“Raising pigs and this baseball thing really go together,” he said. “There are certain things in farming: keeping track of productivity, indexes for your sows, the genetic lines there. To do well, you’ve got to be pretty proficient in numbers. Math has always been my strong suit. I can see things with the numbers.”He cautioned with modesty: “That’s just my theory. I have no proof.”

What he does have is in excess of $300,000 in prize money earned over the last three years.

Some fantasy football leagues offer bigger prizes, but the National Fantasy Baseball Championship says its payout is tops in fantasy baseball, and the Fantasy Sports Trade Association, which represents more than 100 member companies in the fantasy sports industry, said it was unlikely that anyone had won more prize money than Hinkelman.

Hinkelman, however, is not looking to, oh, get involved in fixing the Baltimore Orioles.

“These guys working in front offices know so much more about this than I would ever dream of,” he said. “These guys grew up in the game. I have no ambitions of doing that.”

Fantasy baseball got its start around 1980 with the development of Rotisserie League Baseball, named for a New York restaurant where a group of people, led by the longtime journalist Daniel Okrent, first played it. In the game, participants draft actual players and follow them throughout a season, earning points based on how those players perform in major league games.

The games exploded in popularity with the rise of the Internet. And although fantasy football has eclipsed baseball in popularity, the fantasy sports association said, roughly 13 million people play fantasy baseball.

Hinkelman looks for undervalued players, as does Beane, the Oakland Athletics general manager, who was played by Brad Pitt in the movie “Moneyball.” Hinkelman volunteered to draft 14th in his 15-team league this year, and he focused on three players who ended up doing significantly better in 2011 than in 2010: Matt Kemp of the Los Angeles Dodgers, Justin Verlander of the Detroit Tigers and Curtis Granderson of the Yankees.

His faith was rewarded; Kemp and Granderson turned in seasons worthy of the Most Valuable Player award and Verlander should be a lock for the American League Cy Young Award.

“Those three guys really made up my team there,” Hinkelman said. He had Kemp and Verlander on his 2009 prizewinner, giving him a personal connection of sorts, even though he has never met any of the players. “These guys are like personal friends to you, even though you don’t know them.”

But the 2011 season still came down to the final game for Hinkelman, who battled K. J. Duke, a San Diego investment portfolio manager, for most of the season. Duke, who played in a different league, also had Kemp and Verlander, along with Clayton Kershaw of the Dodgers, a contender for the Cy Young Award in the National League. But an off-year by his first-round pick, the Yankees’ Alex Rodriguez, held him back.

As in “Moneyball,” in which little-known Scott Hatteberg hits a dramatic game-winning home run, a relative unknown cinched Hinkelman’s victory.

Hinkelman plucked the St. Louis Cardinals’ Allen Craig off the waiver wire late in the season, and when outfielder Matt Holliday went down with an injury, Craig stepped in and went on an offensive tear. In the final game of the season, an 8-0 Cardinals victory over the Houston Astros, Craig hit a ninth-inning solo home run.

There were 26 leagues of 15 teams each, and in March, drafts were held in Las Vegas, St. Louis, New York and Atlantic City and online. Each league had a prize of $5,600, and the leaders in each league compete against one another for the overall prize.

In 2011, he paid $8,750 in entry fees for his various teams and took home $116,750 in prizes, according to Greg Ambrosius, who runs the N.F.B.C. as the general manager of consumer fantasy games for Stats LLC.

“You can’t do this twice in three years and have it be luck,” said Paul Charchian, the president of the trade association. “This is somebody who is extremely skilled at what he’s doing.”

Hinkelman’s business suits his fantasy baseball hobby, even though the hobby has eclipsed farming in earnings the past three years. He typically has about 500 pigs on his farm, and he now sells most of them to youths participating in 4-H programs. The pigs are typically born in February and March, and he sells them in April and May so the youngsters can raise them for fairs in August and September.

That means that for most of the summer — baseball season — Hinkelman does not have many pigs on his farm, and he can spend four to six hours a day watching baseball via his package of major league games on DirecTV. He has no employees and only a 300-yard walk to work.

He has four grown children and a wife who does not know much about baseball, although she has learned who Justin Verlander is.

Hinkelman grew up on the farm in Greencreek, population 211, three hours southeast of Spokane, Wash., by car. His father raised cattle and pigs, and his brother still grows wheat on the farm. His youngest son, Gabe, 29, helps him with the team.

He played high school basketball, helping to lead his team to the Idaho state tournament, and sat on the bench at the University of Idaho as a 6-foot guard. He played some slow-pitch softball after that, and now bowls two or three times a week.

He did not play baseball growing up. “There was a Little League in a bigger town,” he said. “None of the farm kids played baseball. I never did.”

At night, he could hear the broadcasts of Vin Scully calling Dodgers games, carrying tales of Maury Wills and Sandy Koufax across the wide-open West. He remains a Dodgers fan to this day, and said he thought the addition of Davey Lopes as a base-running coach would help Kemp realize his potential in 2011.

Hinkelman got on the Internet in the 1990s to feed his fantasy baseball habit, but says he is not too obsessed with technology. At the annual draft in Las Vegas, he said, half the participants have laptops.

“I go down with three pieces of paper, is all I go with,” he added. “I’ve got everything ranked.

“I’m not proficient at computers. I don’t have a smartphone where you can look up stats or anything like that. I just have a cellphone for calls. A lot of people have smartphones so they can look up box scores instantaneously. I’m not at that stage yet. I don’t know if I want to be. You can get married to that stuff.”

Two years ago, he bought a tractor and a livestock trailer with his winnings, and put new windows on the house, paid off a lot of debt and gave some money to his children. “This year, we’ll probably do some remodeling on our house,” he said.

He joked to the N.F.B.C. that he might buy “a boar for my sows,” and the organization put it online, which surprised him. “It makes me sound like a hick, which is O.K.,” he said. It keeps his competitors from taking him too seriously, he said.

A version of this article appeared in print on October 25, 2011, on page B14 of the New York edition with the headline: Modest Farmer, Managing Mogul.