The Mechanisms of Pain 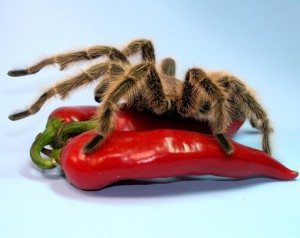 Pain sensations take many forms, from the sting of a bee to the throb of an injury, from the ache of arthritis to the corrosive effects of a tumor. Scientists have studied pain for decades, yet very little is understood about the root causes of pain – the molecular mechanisms that receive those pain signals and send them to the brain.

David Julius, PhD, a biochemist and molecular biologist who chairs the UCSF School of Medicine’s Department of Physiology, is a leader in the effort to find those mechanisms, and he has found quite a few in what may seem unlikely places.

Think, for instance, of the heat generated by a spicy pepper. Is it a matter of taste? Yes, but it’s also an indicator of pain. “You know that,” Julius said, “because if you rub your eye after chopping a jalapeno, you can be sure that’s pain you’re feeling.”

Julius and his team discovered the molecular receptors for capsaicin, for instance – a protein on the outer tips of the sensory nerves known as TRPV1. TRPV1 is an ion channel that’s triggered by the chemical in a chili pepper that makes it “hot,” causing a pain sensation. Building on that discovery, Julius’ lab has branched out into other animals with unusual sensory abilities, such as pit vipers and vampire bats, whose infrared sensors can tell them just where to bite.

While many of his achievements are due to Julius’ rigor and brilliance, credit is also due to Julius’ many collaborators – and to his willingness to work with others.

A Culture of Collaboration

Julius is a leading example of UCSF’s culture of collaboration. Julius has teamed with colleagues at UCSF, postdoctoral fellows in his lab, industry and alumni, all in the name of finding the molecular basis for many of the body’s pain mechanisms.

In one of the most unusual collaborations that showed the power of necessity, of personal connections, and of modern Internet technology, two of Julius’s current postdoctoral fellows, Elena Gracheva, PhD, and Julio Cordero-Morales, PhD, teamed with ecologists in Venezuela to get vampire bat tissue crucial to Julius’s study of that creature’s infrared receptors.

Vampire bats are hard to come by, Julius said, and even harder to maintain in a lab, as they need to eat blood every day. Yet they promised to be revealing, since they knew seemingly by instinct just where to bite their victims to strike blood vessels. Julius wanted to find the infrared receptor that told the bat where to bite.

Cordero knew some scientists in Venezuela from his undergraduate days, and they procured the bats – a 10-hour drive from Caracas. But they did not know how to dissect the bats to remove the necessary ganglia, and fix it in formaldehyde. “Elena and Julio taught them how to do it over Skype,” Julius said, still marveling at the simplicity of the solution. “Without the Skype connection, someone would have had to go to Venezuela.”

Cordero said his friends did very well, and the tissue proved fruitful. “We were able to clone the channels right away,” he said. “It helped us understand the biophysics of how this protein works and connect its properties to animal physiology.”

“David has a real nose for a good project,” Caterina said. “He knows how to really focus and apply effort to a project in a productive way to make it work. Even though other people might be working on the same problems, he’s really good at finding the soft spot of how to solve that problem. Also, because of his scientific breadth and his personality, he’s a good guy and a very good collaborator,” Caterina added. “It’s easy for him to reach out and identify just the right person to work with and help bring the work to the next level. That skill has made the work I’ve been involved in a success, and has helped launch the careers of a number of people. He’s also somebody who looks out for his people and promotes his scientific progeny.”

Another UCSF colleague, Jonathan Weissman, PhD, a Howard Hughes Investigator in the Department of Cellular & Molecular Pharmacology, said his interaction with Julius began when the two had neighboring labs at the Parnassus campus, and has blossomed into a collaboration now that both are at Mission Bay. “It’s very much a story of how things work at UCSF,” Weissman said. “You can have a chance meeting, and even though our labs are seemingly doing different things, my lab had a technique that had a biological solution to the problem that David was working on.”

Showing the depth of the collaboration, a former postdoc in Weissman’s lab, Nick Ingolia, PhD, now a principal investigator at the Carnegie Institute for Science, co-authored some of the key papers on pit vipers and vampire bats with Gracheva.

While Julius acknowledges the national push for the translational benefits of so much scientific effort today – the desire to bring discoveries out of the laboratory and into cures to help patients – he remains at core a passionate advocate for basic science. “What drives us every day in the lab is scientific curiosity,” he said. “Finding out how things work.”Yet he knows that his discoveries will also have “some practical value,” as anyone developing a drug to alleviate pain will need to know how that pain was caused. “If you don’t understand the mechanism, you can’t go very far,” Julius said.

William Martin, PhD, is now senior director in pharmacology for Theravance, a biotech company in South San Francisco, and he worked for several years as a postdoc in the lab of frequent Julius collaborator and UCSF Department of Anatomy chairman Allan Basbaum, PhD. Although he does not currently collaborate with Julius, Martin took important lessons of the value of collaboration from his time there. “If I’m going to crack the problem of pain, I’m going to do that in collaboration with others,” he said. “No one lab can do all the work that needs to be done.” Those lessons shape Martin’s vision for industry-academia collaborations that he works on today.

The work from Julius’ lab is already inspiring many other efforts more closely tied to the search for pain solutions. One of his former postdoctoral fellows, Sven-Eric Jordt, PhD, now leads a lab at Yale University working with pharmaceutical companies and under a grant from the National Institutes of Health focusing on new treatments for chemical injuries such as those suffered from smoke inhalation, chlorine or hydrochloric acid.

“The concept of these channels as chemical sensors was initiated in David’s lab,” Jordt said. “The concept of their interaction with the immune system and inflammation developed later in my lab and in many other labs, and is of enormous interest in the pharmaceutical industry.”

Like Jordt, many other of Julius’ alumni have branched out into related fields of research, creating a network of scientists exploring different facets of this new realm of molecular mechanisms. After studying receptors for wasabi and menthol during her time as a postdoc in Julius’ lab, Diana Bautista, PhD, now leads her own lab at UC Berkeley looking into the molecular causes of itching sensations.

Elena Gracheva, one of his current postdocs who has been working on pit vipers and vampire bats, is now interviewing for her own professorship at many top medical schools, and is looking to take her research into the related field of finding the molecular mechanisms that hibernating animals use to control hypothermia. “Hibernators drop their body temperature from 37 degrees Celsius to 2 degrees Celsius,” Gracheva said. “It’s induced hypothermia. No one knows the mechanism. It’s not dangerous for them, and they have the same genes that we have, but a different control somehow. There’s something at the molecular level, but we don’t know any molecular basis. It’s like a black box. That makes it more exciting.”

That sort of thrill at discovering something new is the enthusiasm that Julius brings to his work, and that he instills in his postdocs. “He’s extremely enthusiastic,” Gracheva said. “Very supportive. He’s discussing ideas 24/7. I get emails from him at 2 am or 3 am.”

“It’s a little daunting when you take a risk,” Julius said. “When you encourage people in a lab to take a risk, they’re trying to move their careers forward, so I tell them not to put all their eggs in one basket.”

But he doesn’t talk them out of swinging for the fences.

“If these things were easy to do, they would have already been done,” he said. “You can work just as hard on something boring as you can doing something exciting, so why not do it? You only live once.”

With a sidebar, also by Dan Fost: About David Julius

The pioneering achievements of UCSF’s David Julius, PhD, have not gone unnoticed. In 2010, he won the $1 million Shaw Prize in Life Sciences in Medicine, as well as the Prince of Asturias Award and the Passano Award – an honor previously won by UCSF Nobel laureates Elizabeth Blackburn, PhD, J. Michael Bishop, PhD, and Harold Varmus, MD. In 2007, he won the Scolnick Prize from the McGovern Institute for Brain Research and the Unilever Science Prize, and in 2006, he won the Klaus Joachim Zülch Neuroscience Prize from the Gertrud Reemtsma Foundation in Germany.

Not bad for someone who started his scientific career studying yeast, which his colleague Allan Basbaum, PhD, noted is an unusual beginning for a career in neuroscience. Yet from his graduate school days at UC Berkeley, Julius learned the power of combining genetics and biochemistry to uncover molecular mechanisms of cell physiology. Julius then went on to do postdoctoral work at Columbia University with Richard Axel, who won the Nobel Prize in 2004 with Linda Buck for their work identifying molecules used to sense smells.

Julius took concepts learned in that lab and applied them to pain research. “Pain seemed to be a little bit more in a backwater,” Julius said. “People hadn’t really identified too many molecules that were involved in sensing different types of painful stimuli, and I decided that would be an interesting thing to do.”

It was a daunting challenge, he said – a quest for “a holy grail.” It called for cloning molecules when it was far from certain which molecules were the right ones. Many others had failed, including large pharmaceutical companies.

But tall orders don’t deter the Brooklyn-born Julius, 56. In fact, according to his friend, Basbaum, who has collaborated with him on more than 20 papers, big challenges attract him.

Julius has instilled that same sense of rigor in the many colleagues and postdocs who have collaborated with him.

One colleague with whom he has not had a formal scientific collaboration, however, is his wife, Holly Ingraham, PhD, a professor of cellular and molecular pharmacology at UCSF, with whom Julius is raising their 12-year-old son, Philip.