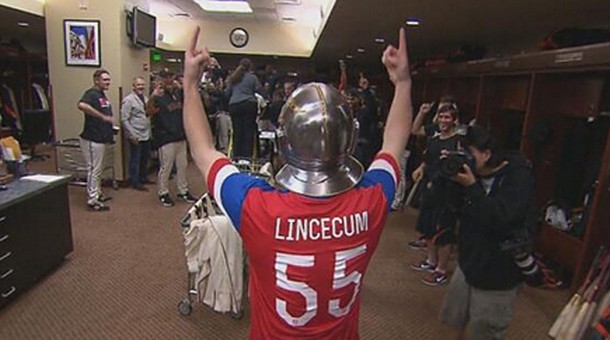 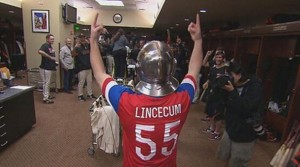 An open letter to Tim Lincecum on the occasion of his probable Giants farewell.

It’s painful to think of this as a farewell letter, although that’s probably what it is. With your hip surgery complete, your contract expiring, and nothing but rehab and uncertainty on the horizon, let us say it now: So long, Big Timmy Jim. And thank you.

We can still remember seeing you pitch in 2007, when we were still disentangling from Barry Bonds, and wondering how someone as wiry and weird-looking as you—a dead ringer for the kid in Dazed and Confused—could have made it to a big league mound. Then you pitched, with that unorthodox, elastic motion of yours, and we quickly put Barry in the rearview mirror.

You helped transform the Giants from a team of better-living-through-chemistry freaks—Bonds and Benito Santiago and Bobby Estalella and Marvin Benard—to actual San Francisco Freaks. From druggie losers on steroids to druggie winners on pot. From a team accustomed to a selfish star hogging the spotlight (as well as his own corner suite in the clubhouse, complete with TV and Barcalounger) to one that checked egos at the door, as you showed so beautifully when you shined in a relief role in the 2012 postseason.

While the steady, no-flash, Southern calm of Buster Posey, Madison Bumgarner, and Bruce Bochy may ultimately define the Giants’ dynasty of this era, it was your electric ability that showed the team how to break the curse and ascend into the winners’ circle for the first time in 56 years. Is it possible for a single player to actually change the way a team is built and managed? Absolutely. You gave the Giants confidence that the plan was working, that pitching would win more games at AT&T than pumped up sluggers reaching for splash hits.

Giants broadcaster Duane Kuiper tagged the team with the “Torture” label in 2010. The real question is what took him so long. Before you arrived, the Giants broke more hearts than any team west of the Cubs. They were known for wrenching defeats: Willie McCovey’s line drive; the 1989 earthquake; 103 wins and nothing to show for it in ’93; muffed catches by Candy Maldonado and Jose Cruz, Jr.; backbreaking home runs by lightweights like Jose Oquendo and Neifi Perez. And then there was 2002—the champagne on ice, the team with a 5-0 lead and eight outs to go—when Dusty Baker pulls Russ Ortiz and triggers a collapse for the ages.

That—and cumulative failure, writ large—used to be the Giants’ legacy. And, now, it’s not. Now it’s all about cumulative success. When, after seven years of futility, the Giants finally made the playoffs again in 2010, you gave us one of your signature moments, blurting an expletive on live television: “Fuck yeah!” For that first game, you authored one of the greatest postseason performances any of us had ever seen (at least until Bumgarner’s 2014 transcendence): a 14-strikeout, two-hit gem to beat the Braves, 1-0. You dazzled throughout those playoffs, outdueling established aces like Roy Halladay and Cliff Lee. When you won Game 5 in Texas to clinch the World Series, it unleashed a celebration the likes of which baseball fans in this city had never seen.

More than all that, though, you gave us a sense of what is possible. How a father in a rainy climate could concoct a new method of pitching, and his 5-foot-11, 170-pound son could demonstrate what a wonderful thing it could be. (Even if that whipsaw motion held a Faustian bargain—a degenerative hip condition that could last a lifetime.) And yet, as your body began to fail you, as your statistics dropped from stellar to mediocre to among the league’s worst, the fans never turned on you. Neither did the team. That says a lot. And, after your best years were behind you, when your 97-mph fastball was a thing of memory, you surprised us all again. You threw a no-hitter. And then you threw another one.

So, we’re going to hang onto that sense of possibility. Next spring, we hope to learn that you are feeling better than ever. That your hip ailment has been overcome, and your fastball revived. That you’ll be donning number 55 once more, if not for the Giants, then for someone else (but, please, Timmy, not the Dodgers).

And even if it doesn’t work out that way, if this is indeed goodbye, we can feel confident that this city—and the team that it loves—will be better off because you were here. Thank you, Freak. We needed that.