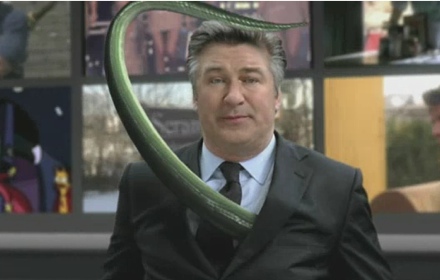 For an online video company, Hulu believes in the power of television. Naturally it loves television content – putting those shows online is a big part of Hulu’s raison d’etre, and its founding investors include News Corp. and NBC Universal.

But Hulu loves TVads as well. “Television works really well,” Hulu Chief Executive Jason Kilar said in a speech at the ad:tech trade show in San Francisco this morning. “We are spending millions of dollars to be in your living room right now.”

Thanks to those ads, including a satirical Super Bowl spot in which Alec Baldwin called Hulu a way to “reduce your brains to a cottage-cheese-like mush,” Kilar said that “our business jumped 49%.”

It should come as no surprise, therefore, that Hulu has borrowed some retro ideas from television while updating them with the interactivity of the Internet. For instance, he said, in 1959, the TV show “Alfred Hitchcock Presents” (which can be seen on Hulu) featured 26 minutes and four seconds of content; by 2009, “The Office” (also on Hulu) had 21 minutes and 49 seconds, with commercials continually encroaching.

“Year over year over year, another ad unit was added and the amount of content was dialed down,” Kilar said. “Advertisers had to work harder to cut through the clutter. We decided it would be more appropriate to go old school” and run shorter ads on its shows.

“You can make money with this strategy,” he said. “We charge a healthy, healthy premium to living-room pricing on a CPM (cost per thousand viewers) basis.”

The difference is that Hulu allows its viewers to choose what ads they want to see, and sometimes to decide if they want three minutes of ads spread throughout the show or shown up front as a movie trailer.

Kilar said Hulu obsesses over making sure its viewers, advertisers and content providers are happy. He did not address the most noteworthy controversy the company has faced in that regard — its request that the service Boxee pull Hulu content. That dispute pitted customers, who loved using Boxee to watch Hulu shows on their TV sets, versus networks who did not want their shows available through Boxee. In a blog post announcing the decision in February, Kilar acknowledged the difficulty of the decision, but said that without network content, “none of what Hulu does would be possible.”

He did say Hulu intended to eventually expand internationally. “We have every intention to be a global service,” he said. “But right now, we are focused on the U.S.”