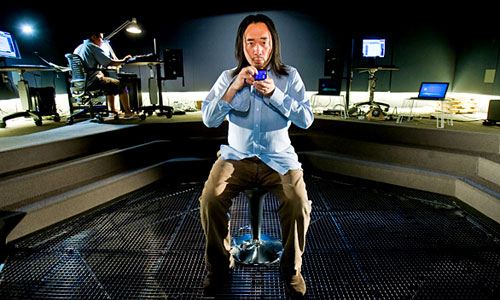 Then his instrument rings, so he answers it and starts chattering away.

It’s an iPhone, transformed through Wang’s software genius into an ocarina — a computerized version of an ancient Aztec flute. Wang, an associate professor of computer music at Stanford University, is the co-founder of SonicMule Inc. The Silicon Valley start-up also known as Smule has sold the Ocarina iPhone application at 99 cents apiece to more than 900,000 people.

To play the Ocarina, you blow into the iPhone’s microphone and press four dots on the touch screen, with different combinations creating different notes.

Wang, 31, came to the endeavor almost accidentally — more as an artist experimenting in the arcane field of computer music than with any sense of building a business.

“Making music is so satisfying, regardless of the result,” Wang says. “That is mirrored by my love of computer science.”

As a doctoral student at Princeton University and now in his position at Stanford, Wang has put those two fields together, conducting laptop orchestras and, more recently, a mobile phone orchestra known as MoPhO.

But it was only the fortuitous hookup with a student at Stanford’s Center for Computer Research in Music and Acoustics that brought Wang’s innovations out of academia and into the marketplace.

That student was Jeff Smith, a Silicon Valley entrepreneur who is now chief executive of Smule. Smith, 42, had co-founded Tumbleweed, an e-mail security firm, and taken it public. He wanted to put a coda on his computer career and learn to play a perfect Schumann Fantasy on the piano.

“But the only way Stanford was going to let me into a music PhD program was in computer music, because of my background,” Smith said.

The idea initially repelled him. “I thought those guys were a bunch of fruitcakes,” Smith said. “To me, music and computers were two separate things. One was beautiful and expressive, and one was cold and calculating.”

And then Smith sat in as Wang gave a lecture at Stanford. Wang took the podium with his trademark unkempt look — hair to his shoulders, unbuttoned shirt sleeves, baggy pants — and played some music on his laptop.

Smith began using ChucK — a programming language that Wang had written at Princeton with his mentor, Perry Cook — to turn the sounds of lawn mowers, dishwashers, Xbox 360s and other objects into music.

That was in 2007, and the iPhone had just come out. By 2008, Smith approached Wang with the idea for a company. Although Wang says running a start-up was “nowhere in the playbook,” he signed on.

When Apple Inc. announced its software development kit in March 2008, enabling anyone to write applications for the iPhone, Smule was in business. It raised $5.5 million in two rounds of funding from Bessemer Venture Partners, Granite Ventures, Maples Investments and Smith himself.

The company’s name is inspired by science fiction author Isaac Asimov’s main character in “The Mule” who could influence billions of people to change their behavior.

“We want to think about things on that scale,” Wang said.

To that end, Smule’s great innovation may lie in its World Stage, a spinning globe feature that’s part of its applications. It enables users to broadcast their music to others and to hear and rate what others are doing.

“It just helps you feel connected to other iPhone users around the world,” says Tara Hunt, 35, of San Francisco, an author and consultant specializing in Internet community. “It’s about the human experience. It’s just an iPhone app, but it feels so much deeper.”

Ocarina users love to get ideas from each other. Daphne Mir, 17, of Laguna Niguel, a student at Orange County High School of the Arts, amazed her theater teacher with an iPhone rendition of “Can You Feel the Love Tonight?”

Smule sent an iPhone loaded with Ocarina to David Choi, 23, of Fullerton, a musician who has amassed a YouTube following, and he’s put up songs as varied as “Row, Row, Row Your Boat” and Katy Perry’s “Hot N Cold,” complete with guitar and vocal accompaniment.

Encouraging a worldwide community is a big part of Smule’s business plan, Smith said. Users are already uploading sheet music to the Web. Smule’s newest app, the Leaf Trombone: World Stage, which mimics the brass instrument, puts the music right on the phone.