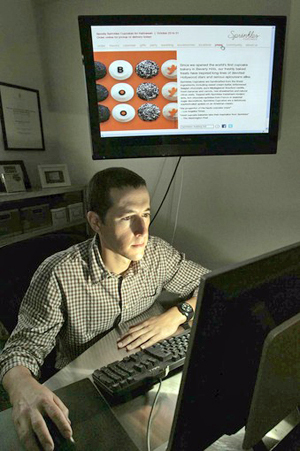 Charles Nelson, president of Sprinkles Cupcakes, the Beverly Hills baker to the stars, doesn’t have a Facebook profile. Nelson, who works seven days a week, has no time for chatting online with Facebook friends.

But Nelson is logged on to Facebook all the time. That’s because more than 70,000 people have declared themselves fans of Sprinkles’ Facebook page, which has its own “vanity URL” at www.facebook.com /sprinkles.

Each day on the website, Sprinkles announces a secret word, such as “ganache,” or “bunny,” or “tropical,” or “love,” and the first 25 or 50 people to show up at any of its five stores and whisper that word get a free cupcake.

“On Facebook, we can ask our customers what’s the next location they want,” Nelson said. “What do they think of our next flavor? It’s an amazing way to communicate with our fans.”

Facebook is not just for friends anymore. The free social networking site — blocked in many workplaces as a potential time-waster — is increasingly becoming an inexpensive marketing tool for small businesses.

Sprinkles is among a growing number of mom-and-pop businesses taking advantage of a relatively new program on Facebook, one that allows them to claim their name, become visible even to folks who aren’t on the site, and stay in close contact with their customers. The business, in effect, can act like any other person on Facebook, posting status updates and seeing what its fans are doing.

Facebook doesn’t break out figures for small businesses but says it has 1.4 million business “pages,” with an average of 100 fans per page. Facebook Chief Operating Officer Sheryl Sandberg said in a speech in New York last month that every day, 10 million people become fans of pages. (Many of those pages are for random concepts, such as the beach, or laughter, or even one called “I don’t sleep enough because I stay up late for no reason,” which has 3.5 million fans.)

Businesses need to go where their customers are, and increasingly these days, that’s on Facebook and other social media sites, analysts say. More than 300 million people have signed up for Facebook, and half of them visit the site every day.

“Over the past two years, we’ve seen this increasing uptick in businesses realizing that their customers are on Facebook,” said Tim Kendall, Facebook’s director of monetization product marketing. “If they can create a presence in Facebook that allows customers to connect with them, it can be a way to strengthen that connection and also to find new customers.”

Plenty of other sites are also wooing small local businesses. The review site Yelp, Citysearch and a host of Yellow Pages sites are all making a push.

And typically, businesses don’t stick to one site such as Facebook. Instead, they spread their presence across the social media landscape, including MySpace, Twitter and LinkedIn. Increasingly, these sites connect with one another so that a status update on Facebook becomes a tweet on Twitter, or a blog post could be pushed out to several sites.

“Companies don’t have a lot of resources to create their own website,” said Jeremiah Owyang, a social media analyst at Altimeter Group. “Using these sites where the customers already are in their communities makes a lot of sense.”

Janet Rothstein, who runs a jewelry shop in Beverly Hills, used a company called MerchantCircle as her gateway to the online world, and she has since obtained a Facebook vanity URL for her page, where she has 63 fans. Having an online presence in so many places increases the odds that when someone searches on Google, they will find her.

Facebook is increasingly finding itself a rival of Google. It believes it can offer more relevant search results because the content is coming from people you know and trust, especially in the hotly contested field of local advertising.

“We are naturally really well-positioned to create a lot of value for local businesses,” Facebook’s Kendall said. “When you think about how you learn in the off-line world about local businesses and services, which cafe, which dentist, you learn a lot of that from the people you trust and are friends with. Facebook is able to streamline that process a bit.”

Yet Google remains the king of search, and Facebook says its pages frequently turn up in the Google search results.

His Facebook page drives traffic and sales because “it ranks well in search and people use search for companies they haven’t done business with before,” Garg said in an e-mail, noting how Facebook has brought in about 5% of his new business. “Facebook is a trusted domain so people click on it and when they see the faces behind the company name, they know we’re legitimate.”

Social media help companies take control of “the Google resume,” said Adrian Lurssen, a vice president at JD Supra, an online legal site based in Marshall, Calif. When people search for your company — or for what your company sells — you want your site to turn up in the first 10 results, or the first page Google delivers.

Nelson of Sprinkles agrees. Fans of his cupcakes (actually, his wife, Candace, is the pastry chef) shower Sprinkles with praise — and word-of-mouth buzz. Their Facebook friends all see when they comment on Sprinkles’ page. “You’re looking for customers but you’re really looking for advocates,” Nelson said. “We’ve never had paid advertising in five years of being open.”