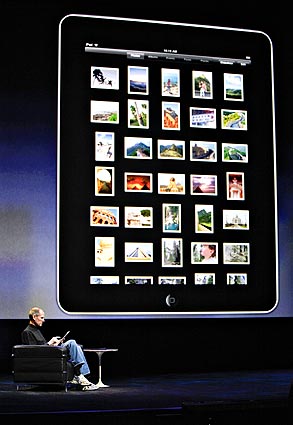 I live-blogged the unveiling of the iPad in San Francisco for the Los Angeles Times, using my Twitter account. After years of speculation that Apple Inc. would bring to market a new tablet computer, the company today took the covers off its iPad. And visual impressions aside that it looked like a big iPhone, the new product will also incorporate aspects of e-readers and netbooks.

But it won’t make phone calls.The iPad — with a 10-inch screen and weighing 1.5 pounds — will run all the more than 140,000 apps that can be used on the company’s iPhone or iPod touch. But the big addition is an iBook application that — with Apple’s own online iBookstore — positions iPad as an e-reader to compete with Amazon.com’s Kindle or Barnes & Noble’s Nook.

Apple hopes to do for books what its iTunes store has done for music, and so far it has signed up five publishers.